A Summary of Changes and Impact to Shareholders

Earlier this year, the regulations relating to amendments to the Canada Business Corporations Act (“CBCA”) for diversity disclosure at publicly-listed corporations were released, which should have a large impact at TSX Venture Exchange (“TSXV”) and Canadian Securities Exchange (“CSE”) listed companies. These regulations will require all publicly-listed CBCA corporations to provide specific information on board and executive officer diversity policies and statistics beginning in 2020. While many Toronto Stock Exchange (“TSX”) listed companies have already adopted some form of board and executive diversity policy disclosure within their annual proxy circulars, the new regulations go one step further and now apply to TSXV and CSE companies as well.

The new regulations, which have taken over a year to be developed, will come into force on January 1, 2020 and will apply to all 2020 shareholder meetings of publicly-listed CBCA corporations. The information should be provided within the annual shareholder meeting notice or proxy circular and will need to go beyond reporting just on gender diversity. The specifics of the new regulations include:

Reporting on Diversity at the Board and Senior Management Level

CBCA corporations will be required to annually disclose their term limits, diversity policies and diversity targets (along with any related statistics) for the representation by “designated groups” at the Executive and Board level. Reporting will apply in respect of the Board as a whole, the Chair as well as any Vice Chair of the Board. At the Executive level, disclosure will be required for the President, Chief Executive Officer, Chief Financial Officer, each Vice President of a principal business unit, division or other function (including Sales, Finance and Production) and any other individual who acts in a policy-making capacity.

Reporting Not Just on Gender Diversity

Comply or Explain Still in Effect

The good news for CBCA corporations is that the new regulations do not impose any quotas or specific diversity requirements on companies. Similar to current Canadian securities law, a “comply or explain” regime will be put in place. This means that CBCA corporations will be under no obligation to increase the level of diversity at the Executive or Boardroom level. However, they must disclose the number and percentage of directors and executives who are members of designated groups. In addition, while they are not obligated to adopt a specific policy or quota for diversity, they will be required to disclose whether they have adopted a formal policy or not and if they have not done so explain why that is the case.

A Review of the Provisions in 5 Years

The expected impact at TSX-listed companies is lower due to the fact that many TSX-listed companies have already been disclosing the existence of a formal executive and board gender diversity policy at their companies the past couple of years and in the absence of a formal policy, the reason why such a policy has not been adopted. However, the expanded definition of diversity to include all “designated groups” as defined in the federal Employment Equity Act will mean additional reporting on the number and percentage of Aboriginals, persons with disabilities and visible minorities, which will require additional time and effort of staff to ensure adequate disclosure in these areas. That said, this change is more incremental in nature.

At TSXV and CSE-listed companies the impact should be much larger due to the fact that formal diversity disclosure regulations are currently not in effect for companies listed on these exchanges. This will require Boards at these companies to spend some time discussing the issue of diversity and whether the need for a formal policy is warranted at their company. If a formal diversity policy is not put in place, boards will then have to discuss the reasons why a formal policy is not required for their company and be able to explain this to shareholders through the annual proxy circular. Staff time (already stretched as it is at many TSXV and CSE-listed companies) devoted to this issue will also be increased to ensure that adequate diversity disclosure is provided to align with the new regulations. This will increase the soft compliance costs associated with annual disclosure.

Diversity has been an ever-growing issue at public companies in recent years. While some progress has been made, it is clear that the federal government feels this progress is not enough and is hoping that new diversity disclosure regulations will lead to further change. It will be interesting to see which companies embrace this new regulation to spark change in the make-up of their boards and executive ranks and ultimately which companies choose to do the bare minimum.

To review copies of the new regulations please click on the following links:

An Essential Tool for Improving Board Composition

Creating a Board Skills Matrix

An essential question asked by board members is how can we improve our performance? While there are many possible answers to solve this riddle, making sure your board composition is set-up as intended is key. An increasingly prevalent tool used by boards in evaluating their board’s composition is the Board Skills Matrix. According to a 2017 study by Equilar, 307 U.S. and Canadian public companies disclosed the use of a Skills Matrix within their proxy statement. A Board Skills Matrix strengthens an organization’s overall governance practices by identifying the current skills, knowledge, experience and capabilities of current board members. The matrix is a relatively simple table that lists all board members along the top with a board’s view of the essential skills and experience required by the board to be most effective. 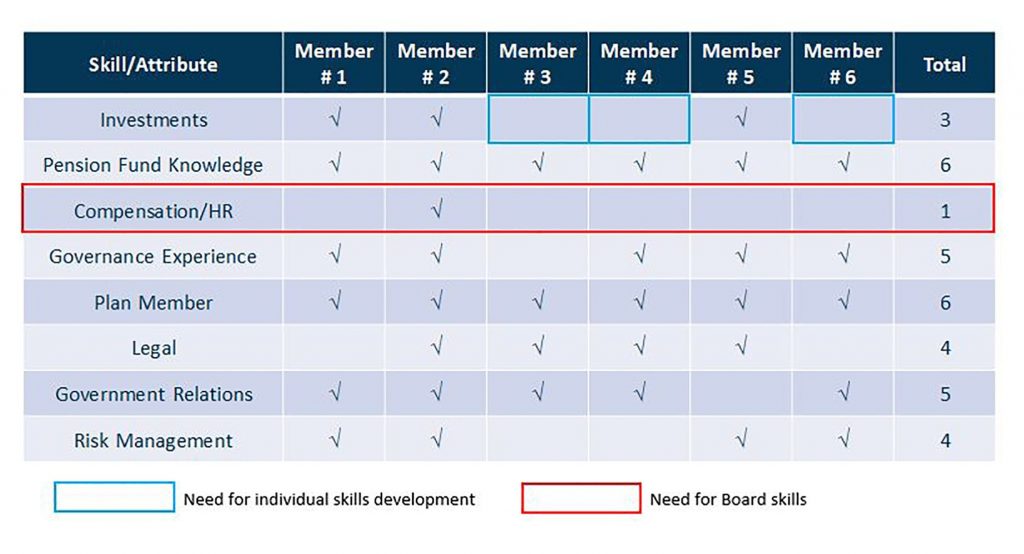 A completed skills matrix, as demonstrated above, helps the board in two ways:

In the example above, Board Members # 3, 4 and 6 could use individual skills development in the area of Investments. Increased skill/experience in Compensation and Human Resource matters is required for the board, as many board members do not have experience in that area.

At a bare minimum, the results of the Board Skills Matrix assessment should be shared internally so that the board can identify any areas for future improvement. However, many public companies are taking a pro-active approach and disclosing the results of the assessment directly in their proxy statements on an annual basis (as evidenced by Equilar’s research above). For mid and large cap companies, shareholders are expecting more transparency from companies which require companies to be honest about the skills and experience the board truly values and how each board member stacks up. They can also use this opportunity to detail to shareholders how the board plans on filling any identified gaps in skills.

How does a board determine which skills and experiences to include within its skills matrix? It starts by asking where the organization is today and where it wants to be in the future? Are the skills required to sit on the board today going to be the skills required 5 years from now? This allows the board to determine the skills required to sit on the board and add value, both now and in the future. There are certain skills that are commonly required for a board such as Financial Literacy, Human Resources and Legal experience, but boards should also ask what industry-specific skills and experience are required in addition to functional experience. Are there diversity aspects that need to be considered by the board in addition to specific skill sets? These questions should all be answered when developing a skills matrix.

What skills should you be looking for? Recent research by Korn Ferry indicates that the Top 5 skills required by boards as part of their Board Skills Matrix are as follows:

Other skills/experience included by companies are:

While not identified above, a growing number of companies are also including Cyber-Security and Information Technology experience on their boards to deal with the increasingly concerning issue of cyber-hacking.

Historically, companies produce a long “laundry list” of skills and experiences as part of their Board Skills Matrix. However, institutional investors are starting to advocate for a more nuanced approach to developing a skills matrix. Instead of including 10-15 different skills and/or experience, they prefer to see companies disclose the 3-5 most important skills required on the board with an evaluation of how each board member compares against these skills. This makes it more clear which skills and experiences the board feels add the most value and how the current set of board members adequately cover each of those skills/experiences.

In addition to skills and experiences, companies are also looking at ways to increase the diversity on their board and will sometimes include this as one of the board considerations when evaluating board composition. While quota-based systems have been implemented in many European countries, they have historically not made their way across the Atlantic to North America. However, recent trends indicate a growing focus on gender diversity in North America, with California recently approving a quota-based system for public companies incorporated or headquartered in the state. In Canada, the Toronto Stock Exchange (“TSX”) has implemented a comply or explain regime that requires companies to disclose the existence of a gender diversity policy for executives and board members or explain why a policy has not been put in place. ISS and Glass Lewis have also put in place specific voting recommendation guidelines that will recommend “Against” votes for Nominating Committee Chairs in situations where there is no written diversity policy and no female board members. These new laws and policies should cause boards to consider diversity within their matrix in order to stay in line with this evolving trend. Diversity should also go beyond just gender to include age, race, religion and ethnicity as well.

Getting the composition of your board right is a tough job, especially with the evolving nature of the world as we transition to a more digital world and deal with emerging issues such as climate change, cyber-security and sustainability. It is important for boards to put in the proper processes in place to ensure they are operating efficiently and effectively. One of the essential tools in doing this is the development of a well thought out Board Skills Matrix to identify the skills and experiences required and evaluating your board members against this criteria. By using this tool, boards can prepare themselves to deal with a company’s major issues, both today and into the future, thereby acting in the best interests of stakeholders.

Like what you read? Feel free to browse through the rest of our blog content (how about checking out The Power of Board Assessments) for more.

GGA’s Senior Partner Arden Dalik is featured in the latest Business In Vancouver magazine, where she provides her commentary on the latest findings on the number of women CEOs in BC’s top firms. .

As Arden states, “‘the CEO is still a position where we are really lagging behind, obviously, versus the demographics of the population …'”

That said, she points to the growing number of women in senior executive roles as an indication that things have been changing over the last 10 years.

“One of the top positions in Eldorado Gold is occupied by a very strong, very capable woman,” she said. “They also have a woman on their board now in a very technical, male-dominated industry.”

You can read the full piece, authored by Nelson Bennett, here.

GGA’s Arden Dalik was once again the featured expert, along with Governance Studio’s Sylvia Groves on a range of pieces published which focused on the results of GGA’s unique collaboration with the Calgary Herald, surveying board diversity within Calgary’s top 100 publicly traded companies. The survey is the first of any project of its kind published in collaboration with a Canadian newspaper.

Deborah Yedlin’s piece, which featured a video interview with Arden and Sylvia, can be found here.

Sylvia Groves’ op ed on board diversity trends and issues can be found here.

Amanda Stephenson’s story on the energy sector preparing for new guidelines for diversity can be found here.

Amanda Stephenson’s piece on who’s leading the way on board diversity can be found here.